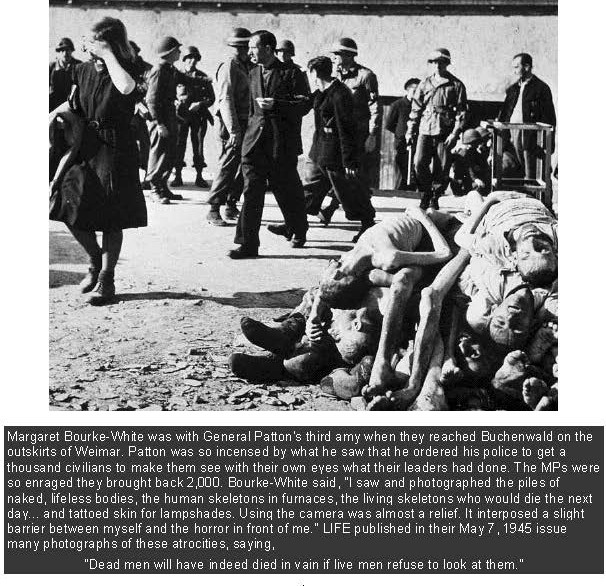 Now it is clear why the media hardly mentioned Pearl Harbor this year.

When I was a kid, I couldn't understand why Eisenhower was so popular.  Maybe this will explain why . . .

It is a matter of history that when the Supreme Commander of the Allied Forces, General Dwight Eisenhower, found the victims of the death camps he ordered all possible photographs to be taken, and for the German people from surrounding villages to be ushered through the camps and even made to bury the dead.

He did this because he said in words to this effect: 'Get it all on record now - get the films - get the witnesses - because somewhere down the road of history some bastard will get up and say that this never happened’

This week, the UK debated whether to remove The Holocaust from its school curriculum because it 'offends' the Muslim population which claims it never occurred.  It is not removed as yet. However, this is a frightening portent of the fear that is gripping the world and how easily each country is giving into it.

It is now more than 70 years after the Second World War in Europe ended. This e-mail is being sent as a memorial chain, in memory of the, six million Jews, 20 million Russians, 10 million Christians, and 1,900 Catholic priests Who were 'murdered, raped, burned, starved,  beaten, experimented on and humiliated' while many in the world looked the other way!

Now, more than ever, with Iran, among others, claiming the Holocaust to be a 'myth,' it is imperative to make sure the world never forgets. Man's inhumanity to man that happened so easily, so acceptably, must not be swept under a rug -- or even a flying carpet. Only awareness and vigilance will keep the extremes of the Holocaust from being repeated.

This was originally an e-mail intended to reach 400 million people! Be a link in the memorial chain and help distribute this around the world.

How many years will it be before the attack on the World Trade Center 'NEVER HAPPENED', because it offends some Muslims???

Do not just delete this message; it will take only a minute to pass this along.

Remember when all classrooms had an American flag in them?

Do they even teach our children about the World Trade Center attacks in 1993 and 2001, or did it go the way of Pearl Harbor and Veterans Day?

Don't even mention Christmas or Hanukkah or prayers in school. Many schools no longer recite the Pledge of Allegiance and many children do not know the words to our National Anthem, or that we even have one!

Evil needs only that it be denied or ignored to thrive.

Do not read this message and delete; it will take only a minute to pass it along. Please do so.