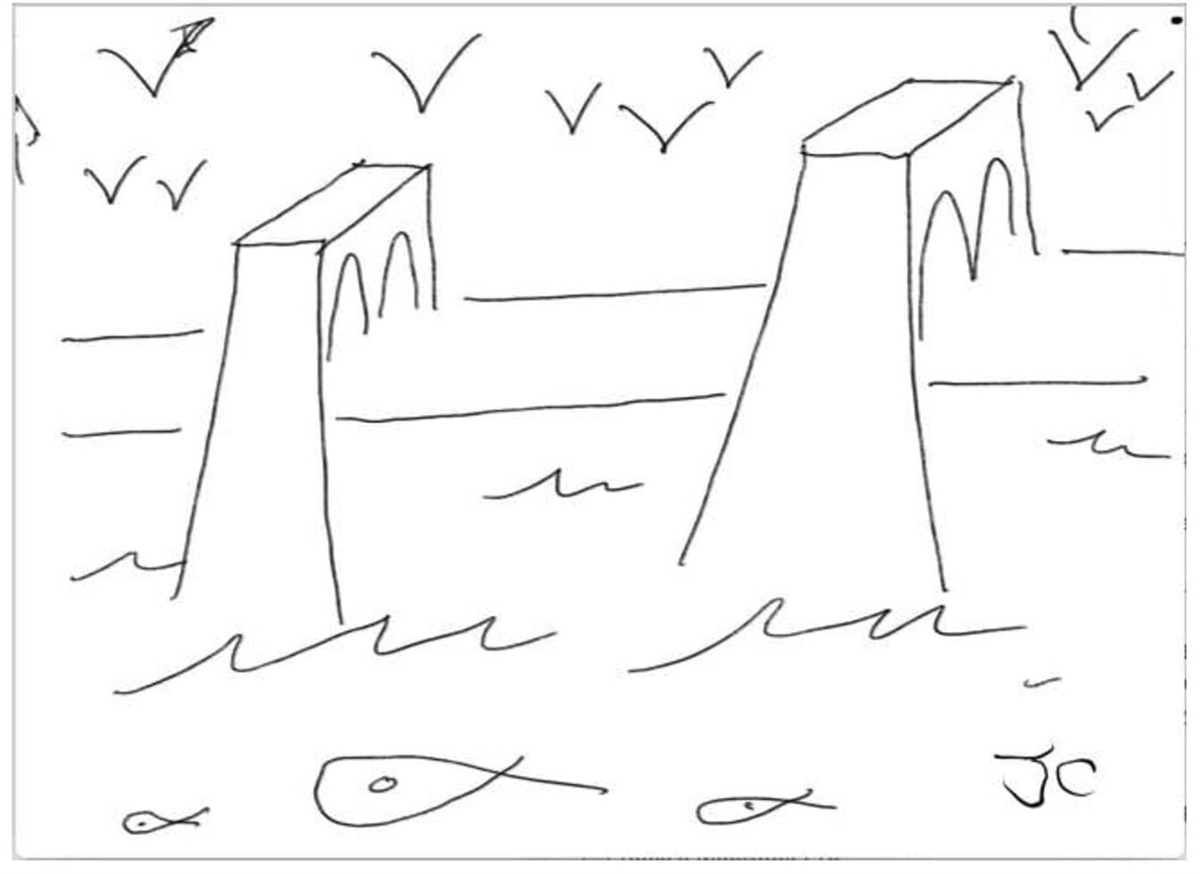 You Wanna Buy A Bridge?

Recently, a piece of collage art entitled “Everydays: The First 5000 Days,” by an artist known as Beeple, sold at a Christie’s auction for $69 million. The Wall Street Journal noted that the price was higher than any that has ever been paid for works of Frida Kahlo, Paul Gaugin, or Salvador Dali. But, before the auction, few outside the digital art world had ever heard of Beeple, which may explain why the bidding started at just $100. But the sale does not suggest a sudden re-evaluation of his talents. Instead, it is a stunning statement about the medium of the art itself or, more precisely, the lack of it. In fact, “Everdays: The First 5000 Days” isn’t made out of anything you can touch. It is entirely virtual.

Unlike other pieces of high-priced art, you can’t hang it over your mantle to dazzle your dinner guests. The image is only available on your computer or, better still, through a virtual reality headset. But even as the owner of the image, you won’t be able to control access to it. The file has been copied thousands of times, so anyone with access to the internet can look at it as much as you. And unlike the clear differences that exist between an original Van Gogh and even the best copies, there will be no visual differences between the digital copies and the original.

Instead, what the buyer paid for is a unique claim to ownership. And while the art itself can be replicated endlessly, the claim, which entitles the owner to nothing more than the right to resell the claim, appears to be worth $69 million. Welcome to the brave new world of non-fungible tokens (better known as NFTs), the kooky offspring of the red-hot crypto currency market. In the NFT universe, a piece of virtual art is worth almost $10 million more than a 238-foot “Bond Villian” mega yacht in the real world. Call me crazy, but I’ll take the boat.

NFTs are made possible by the same “blockchain” technology that provides bitcoin with its claims to “scarcity.” Through its distributed ledger model, the supply of cryptocurrencies, such as bitcoin, can be strictly limited, and claims of unique ownership can not be counterfeited. The same technique provides NFTs with their unique “non-fungible” features. But so what? They still have no tangible properties?

The buyer who paid $69 million for the Beeple collage can take comfort from the fact that a single 10-second animated video by the same artist, of a giant dead Donald Trump covered in graffiti, was purchased in October 2020 for $67,000 and was just sold for $6.6 million! No matter that the video is viewable for free online. Price rises like that have fueled an NFT feeding frenzy that is taking many bizarre forms. In recent days, NFT versions of sports trading cards, sneakers, and clothing have sold for tens of thousands of dollars. An NFT version of a tweet by Twitter CEO Jack Dorsey just sold for $2.9 million.

It’s getting so crazy that even jokes about the absurdity get quickly swallowed up in the absurdity. A man in New York just sold an NFT fart for $75 (a relative bargain considering that a virtual version is far less offensive to the nose than a real one.) As proof that this is all just one giant Monty Python spoof, British comedian John Cleese (the founder of the troop) just posted for sale a simple doodle he drew of the Brooklyn Bridge with the caption, “You want to buy a bridge?” (recalling the classic scam of New York City immigrants). As of press time, Cleese’s doodle is selling for $36,000. [shown above] Cheap for an historic bridge, but don’t worry John, there are still 10 days left in the auction.

NFT real estate seems to be the next frontier. A virtual house, by a celebrated online “architect” just sold for $500,000. On March 19th, Bloomberg News reported that a real estate investment firm that had been buying distressed condos in the physical world, is raising funds, at minimum increments of $25,000, to purchase virtual land in several recently created online “metaverses.” The goal is to develop the “land” into virtual hotels, stores and other uses, hoping to realize outsize profits when they sell to other virtual enthusiasts.

But when considered a little more seriously, the NFT craze is actually a semi-rational development in the perfectly insane crypto monetary system. It is not coincidental that almost all the purchases of NFTs have been made with cryptocurrencies. In fact, oftentimes they can ONLY be purchased with crypto. That means no one is buying these fake assets with money earned through sweat and toil in the real world.

For years crypto investors have been watching with glee as their virtual holdings have rocketed into the stratosphere. But one of the cardinal rules of the true believers is that they should “hold on for dear life” (known as HODLing) and only spend when bitcoin reaches its destined price (whatever that may be). But many of these investors may have found that having wealth without spending it is a hollow victory. Many people may be becoming desperate to find something other than commas to show for the crypto riches. But as the pool of people who will sell actual assets for crypto is probably shallow, holders may find it easier to buy virtual assets with their virtual currency. This decision may be aided by the fact that people can buy NFTs without having to convert cryptos into dollars, which might invite unwanted government scrutiny. So what happens in virtual Vegas, seems to be staying in Virtual Vegas.

But the psychological causes may even run deeper. Since many of the crypto elites have made many, many thousand percent gains on their investments, they believe that they have stumbled upon the new El Dorado, the land of unlimited wealth where the streets are paved with the new gold. They feel that they have some secret knowledge of which the rest of us luddites can’t conceive. They know from wisdom and experience that “new” digital assets have appreciated much faster than their counterparts in the “old” real world. So why buy real estate that may give you a measly 5% annual return when you can get that on a daily basis with virtual real estate? The fact that the pandemic has made us all cyber-dwellers in one form, or another has thrown another log on the fire. Many people have forgotten what it’s like to operate in the real world.

But the mainspring that fuels all of this is the conceit that “real” does not have any intrinsic superiority to “virtual.” Bitcoin has been the best performing asset of the last 10 years, despite the criticism from people like me, who argue that to be considered as a true store of value an asset must have some intrinsic value itself. NFT enthusiasts believe that such criticism of NFTs will be similarly off target.

So, in that sense, NFTs are really just the next iteration of crypto currencies. But with NFTs the absurdities are much more easily seen. We can accept that a monetary unit can have no intrinsic value because for 50 years we have operated under such a system at the national level. The U.S. dollar ceased to have intrinsic value when President Nixon ended its convertibility into gold in 1971. Since then, people have simply seen it as a unit of measure that has value based on the things it will buy from those who are happy to accept it as payment.

The belief that dollars created out of thin air have real value creates the illusion that government deficits don’t matter, and that the government can create real wealth through the printing press. While I believe that such a system is dangerous and invites the kind of government expansion and currency debasement we have seen since 1971, there can be no doubt that it can function, at least until the confidence that undergirds the whole system finally gives way. That’s because no one wants money for its own sake. They want it for the things it can buy.

The acceptance of intrinsically worthless fiat currency has led to the wide acceptance of similarly worthless crypto currencies. But virtual assets don’t share the illusions baked into virtual currencies. They are the things that you want to buy with the money. It’s a much heavier lift to convince someone that a virtual house is as good as a real one…especially if it’s raining. As a result, the NFT rally should prove more ephemeral than the rise of cryptos themselves.

It is conceivable, I guess, that this physical world becomes so unpleasant and inhospitable, and that the virtual world becomes so accessible, visceral, and fantastical (through better technology), that a significant number of people will prefer to live in their basements with virtual reality headsets then to go to actual places and meet actual people. If that’s the case, maybe a penthouse on virtual Fifth Avenue will be worth more than an actual penthouse on Fifth Avenue?

Maybe I’m out of touch, but I don’t see that happening anytime soon. Strangely, most people still prefer things that they can touch to things that they can’t. The Matrix was just a movie. It should come as no surprise the Beeple (the artist) immediately turned around and converted the $69 million he made from the sale of his art into dollars.

And so, I suspect that this mania will soon be shown for what it is: a speculative bubble on steroids. Maybe the ultimate collapse of the NFT market will be the pin that pricks the larger crypto bubble. When that happens, perhaps some of the people who were buying what they thought was digital gold will finally buy some of the real thing. That’s because digital gold is as much real gold as a digital house is a real house.